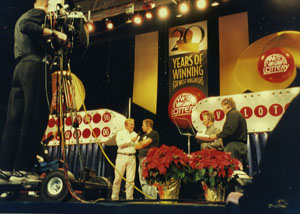 The hour-long show was hosted by veteran television game host Bob Eubanks and taped before a studio audience in the West Virginia Cultural Center theater. Twenty contestants were introduced by the host and were asked to select letters on giant game boards to determine whether they would move to the next round.

Bill Hogan not only directed the show but also was responsible for set design, lighting and sound and scripted the made-for-television event. The production was pre-taped and televised to a statewide audience in December 2006.

The contestants were selected to participate in the 30-minute game show as a result of a random drawing of monthly winners from the 20th Anniversary second chance drawing that was held on November 20..

Nearly $3 million in prizes were awarded during the show. The show finished with Gladys K. Shilling of Charleston winning the $2 million grand prize drawing.