0
By Carl Varney Posted on November 28, 2007 in iAproductions News 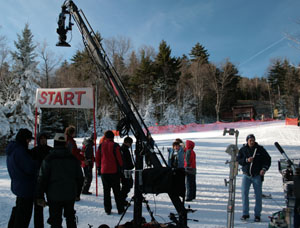 Image Associates, LLC arrived at Snowshoe Mountain on November 26th, 2007 with a crew of 75 local professionals to shoot the fifth in the series of “Games People Play” TV spots for Charles Ryan Associates client, the West Virginia Lottery. Over the last year and a half, iAproductions has produced four muli-spot sets for Charles Ryan Associates and the West Virginia Lottery with creative concepts built around Joe South’s 1970s hit “The Games People Play.”

The shoot required weeks of pre-production planning, a crew of 40 and a cast of 35. The weather played a major role in the production. With temperatures ranging from 34 degrees to 12 degrees fahrenheit, producer Dianna Ballard went through enormous efforts to make and keep track of real snow on the slopes and in the remote locations used in the production. High winds and steep inclines made every setup difficult and taxed the crew and its equipment to the max. With the extreme terrain and temperatures, safety was of great concern in the potentially dangerous environment. Snowmobiles were used to transport the equipment and crew to the slopes safely.

Two Sony HDW-F900 Cinealta high-definition cameras were used to capture the action during the intensive production. Steadicam mounts, a 30 foot jib and cameras mounted on snow mobiles yielded many high energy shots. The wind and snow only added to the action.

“This is where experience counts,” said Image Associates managing member Bill Hogan from beneath layer upon layer of protective clothing. “With the high winds, ice and snow this is not the place to teach the basics.”

iAproductions’ experienced crew braved the elements, the steep terrain and a tight production schedule to complete the fifth installment of the West Virginia Lottery’s “Game People Play” commercial series. The shoot began November 26th and the set was wrapped on November 30th, although over a month’s worth of preparation went into the week-long shoot. The shoot required long 10-12 hour days and the treacherous footing and biting cold made the days seem even longer, but as many crew members were jokingly saying, “this business if for the passionate, not the meek.”