0
By Carl Varney Posted on October 29, 2008 in iAproductions News 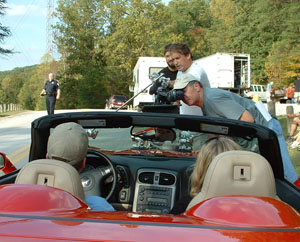 iAproductions, a subsidiary of Image Associates, LLC, recently provided comprehensive high-definition production services to Charles Ryan Associates for a new series of “What’s Your Dream?” commercials for the West Virginia Lottery. The concept was created by Charles Ryan Associates and the production bid received by iAproductions on September 22nd. The job entailed producing six commercials. An unusually short deadline was presented to our staff, and the brainstorming began immediately. The pre-production process for a shoot of this magnitude generally takes at least one month, but within 13 days the production was in full swing.

I.A Productions utilized two Sony Cinealta HD cameras during the shoot. These state-of-the-art cameras are the industry standard for high-definition images and they were exactly what Charles Ryan Associates requested. One of the most dynamic visuals was created when our camera was mounted to a red Chevrolet Corvette. The scene called for fluid movements while the car was being driven at high speeds around sharp curves. Our professional crew was able to secure this shot and move on to the next scene without breaking pace.

Our talented art department envisioned multiple locations and sets for the production. For one spot, our crew constructed a haute-couture dressing room that was designed and furnished with items chosen by Image Associates’ award-winning Art Director Sharon Harms and approved by Steve Grey, Charles Ryan Associates’ vice president/creative director. The dressing room scene required the cameras to be mounted on our jib to create a surreal effect. Lighting effects combined with unique camera angles and movements created just the look that the concept team at Charles Ryan Associates had envisioned.

During the middle of the shooting week, the weather did not cooperate, and producer Dianna Ballard had to make last-minute changes and preparations to overcome an intense rain storm. A jib was required in an outdoor setting, but ultimately Ballard was left with no choice but to reschedule the crew and make special arrangements for the jib operator to return to Charleston the following day to secure the specialized shot. The crew relocated to the Clay Center for the Arts and Sciences and began work on a separate spot as a result of the rain. Ballard arranged together all the missing components such as talent and location details, and without delay the production continued. This allowed all parties involved to stay on schedule.

The five-day shoot included stops in eight locations around the Charleston metro area. The shoot was comprised of 26 mainly local professionals. A total of 25 regional actors were hired and costumed in clothing and props all purchased within the local Charleston area. Space Junk Media was contracted to assist Director Bill Hogan in all areas of special effects, and Hogan was involved with the post-production editing and special effects throughout the process.

In the end, Charles Ryan Associates was quite pleased with the creative process and the final product. The West Virginia Lottery commented on how smooth the production process went in addition to the professionalism and timeliness of the I.A. staff and crew. According to Director Bill Hogan, what should have taken at least one month of pre-production planning only took the iAproductions’ team two weeks to complete. By the end of the following week, the product was out the door!